A veteran educator breaks down the state’s perpetual tug-of-war over teacher pay.

Of course, Terry Stoops, vice president for research and director of education studies at The Locke Foundation, would spin this “statistic” into an empty narrative.

Even House Speaker Tim Moore tweeted out some praise for this empty “victory.”

That figure is one of the most grossly manufactured statistics in this state. Let’s lay bare the facts of how that figure has come about.

The operative word here is “average”.

What GOP stalwarts purposefully fail to tell you is that most of the raises have occurred at the very low rungs of the salary schedule. Of course, you can raise the salary of first-year teachers by a few thousand dollars and it would give them an average raise of maybe 10-15%.

You would only have to give veteran teachers a very small raise funded by longevity pay (which we no longer get) and the overall average raise still looks good. Plus, not much money has to be invested.

“Average” does not mean “actual”. But it sounds great to those who don’t understand the math.

This report reflects a whopping double standard of the NC General Assembly and a total contradiction to what is really happening to average teacher pay. Just follow my logic and see if it makes sense.

The last nine years have seen tremendous changes to teacher pay. For new teachers entering in the profession here in NC there is no longer any graduate degree pay bump, no more longevity pay (for anyone), and a changed salary schedule that only makes it possible for a teacher to top out on the salary schedule with $52,000 per year (unless they use their own money to pursue a rigorous national certification process). 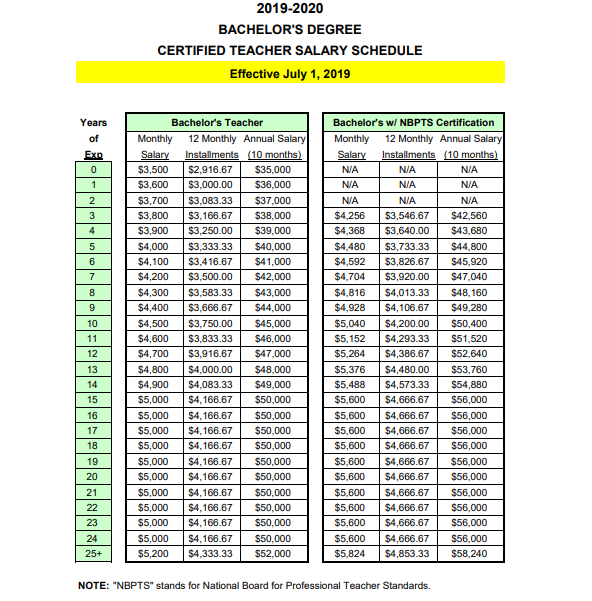 So how can it be that the average pay in NC is greater than $54,000 when no one can really make much more than $52,000 as a new teacher in his/her entire career unless they all become nationally certified?

Easy. North Carolina is counting all of the veteran teachers’ current salaries in that figure.

The very people whose salaries simply disgusted the former governor and the General Assembly to the point that they had to take measures to reduce them are actually being used to tout this new wonderful “average.”

What about local supplements?

Furthermore, this average is counting on local supplements. This comes in the face of state budgets that have, over the years, placed more of the burden on local school systems for administrative costs.

Now each county has to raise more money to actually offset those costs and also allow for local supplements. And not all localities provide the same supplements. Imagine what the pandemic will be doing to these funds.

Plus, those LEAs will have to do something in the next few years to raise even more money to meet the requirements of the delayed class size mandate.

Any veteran teacher who is making more than $50,000 based on seniority, graduate pay, and national boards are gladly counted in this figure. It simply drives up the current average pay.

But when these veteran teachers with seniority, graduate pay, and — possibly — national certification retire, then the very people who seem to be a “burden” on the educational budget leave the system.

In actuality, that would drive the average salary down as time goes on. If the top salary that any teacher could make is barely over $50,000 (some will make moreas National Board Certified Teachers, but not a high percentage), then how can you really tout that average salaries will be higher?

You can if you are only talking about the right here and right now.

The “average bear” can turn into a bigger creature if allowed to be mutated by election-year propaganda. That creature is actually a monster called the “Ignoramus Rex,” known for its loud roar but really short arms that keep it from having far-reaching consequences.

Remember the word “average” is a very easy word to manipulate. Politicians use it well.

In this case, the very teachers who are driving the “average” salary up are the very people that the state wants to not have in a few years. There will then be a new average. It can’t possibly be over $54,000 then if current trends keep going.

And Stoops even knows that. From a report in The News & Observer in March of 2019:

Terry Stoops, vice president of research for the John Locke Foundation, says he agrees that the average teacher salary is misleading. But he questions why critics didn’t make more of an issue of its accuracy before Republicans began raising the state average.

“The fact that the average is influenced by factors such as the experience of teachers and the credentials that they possess is one of the reasons why the average is a misleading figure to use when discussing teacher compensation,” Stoops said. “But the problems preceded the Republicans.”

Interesting that he did not mention that the Republicans took away step increases and longevity pay and that they have been in power for almost a decade.

Editor’s Note: This post originally appeared in an unedited form on Egan’s “Caffeinated Rage” blog, where he writes regularly about North Carolina education.

Culture Whirligigs, Wizards, and the Devil: Five of the Most Bizarre Destinations in North Carolina

Culture From Deviled Eggs to Dessert, Top 5 Recipes for Your Next North Carolina Cookout

Culture Country-Fried Steak, Braised Goat, and Fresh Fish: Here Are Some of the Best Black-Owned Restaurants in NC