As the Jan. 6 hearings begin Thursday night in primetime, new polling shows 65% percent of voters support the House investigation, while only 28% oppose it, according to a new Courier Newsroom/Data for Progress poll.

Nearly 18 months after supporters of former President Donald Trump launched a deadly siege on the US Capitol and tried to overturn the 2020 election results, polling shows that voters remain concerned about the long-term impact of the Jan. 6 attack–and want accountability.

A new Courier Newsroom/Data for Progress poll finds that 61% of likely voters are “very” or “somewhat” concerned that Trump Republicans will promote violence to achieve political goals in future elections. Another 10% are a “little concerned” about the possibility. Only 29% of voters say they’re not concerned at all.

The findings come as the US House Committee investigating the Jan. 6 attack will hold the first of six public hearings Thursday night in primetime.

The hearings are expected to delve into many different aspects of the investigation, including Trump’s promotion of the “Big Lie” that the 2020 election was stolen, his attempt to pressure Vice President Mike Pence to illegally throw out electoral votes for then President-elect Joe Biden, his calls for supporters to assemble in Washington D.C. to “Stop the Steal,” and his failure to call off the violence for more than three hours after the attack on the Capitol began. 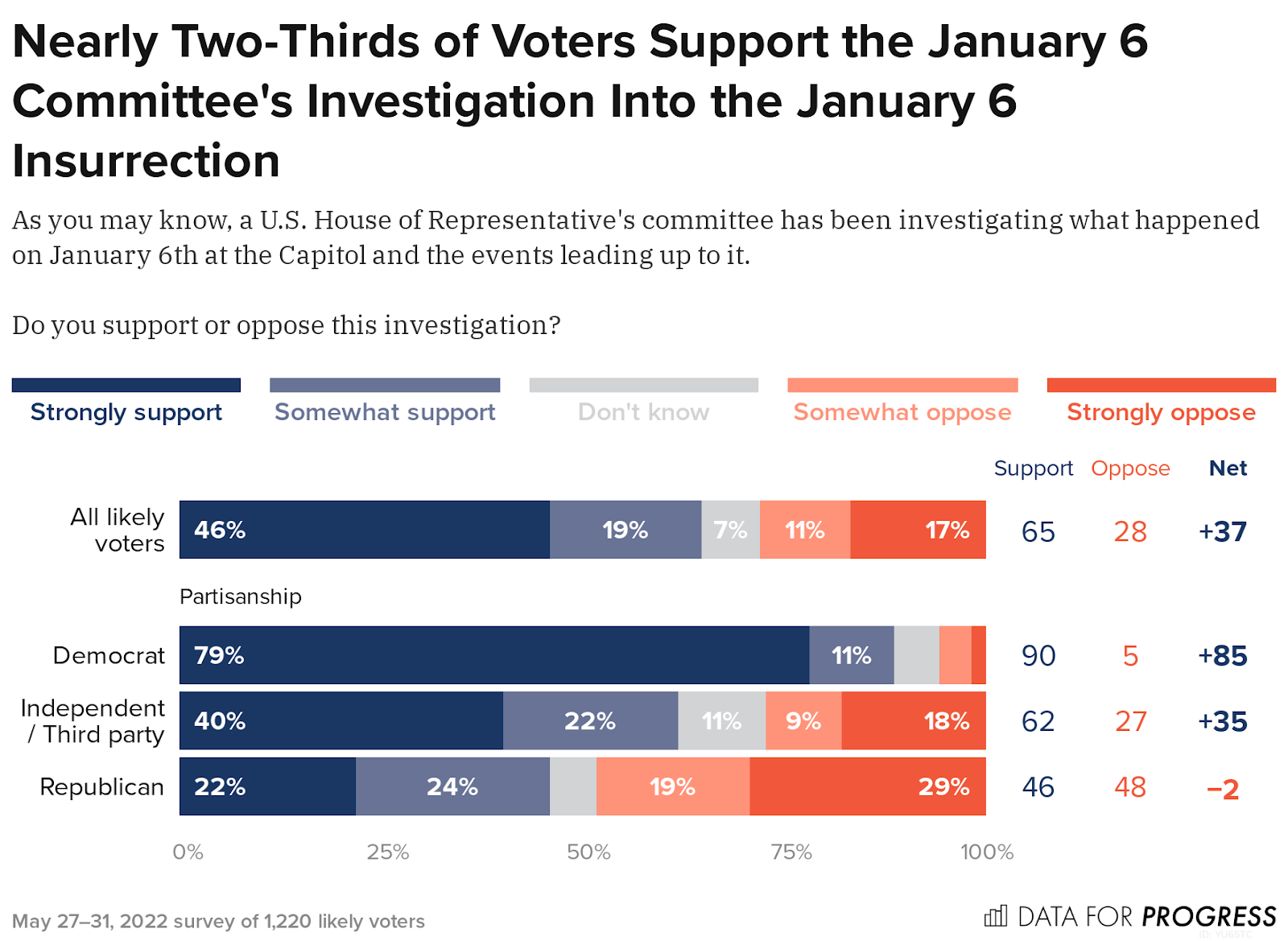 The survey also found that most voters blame Trump for what happened on Jan. 6 and believe he should be held accountable.

The hearings are also expected to highlight efforts by Trump’s allies to help keep him in office or return him to office after Biden was inaugurated.

And a recent New York Times analysis of nine key swing states, including North Carolina, found that 357 sitting Republican politicians—amounting to 44% of all Republican legislators across the nine states—have used the power of their office to discredit or try to overturn the 2020 election results.

In multiple states won by President Biden, more than 70% of Republican lawmakers—under pressure from former President Trump—took such actions, which include attempts to delay the vote count, support for lawsuits intended to overturn the election, support for sending alternate slates of electors to Congress (to override the will of voters), and attempts to manually decertify election results—an idea that is actually impossible, according to experts.

Legislators in North Carolina didn’t face the same kind of pressure since Trump won the state.

Fifty-six percent of voters oppose these efforts, while 33% support them. However, a majority of Republicans polled (54%) approve of such proposals, highlighting the lasting and corrosive impact of the “Big Lie.”

While Republicans have repeatedly alleged voter fraud, they’ve failed to provide legitimate proof to back up their claims, and an enormous body of evidence shows there was no widespread fraud during the election.

While efforts behind the “Big Lie” have repeatedly failed, they’ve achieved a destructive impact on Republicans’ faith in elections. A majority of Republican voters now do not believe Biden was legitimately elected, despite ample evidence to the contrary.

Furthermore, supporting Trump’s “Big Lie” has become a litmus test among Republican base voters. The former president has spent much of the past year endorsing candidates who embraced his lies and discredited his 2020 loss.

It’s still a toss-up as to whether repeating the false narratives about 2020 will hurt or help Republicans’ electoral prospects with more moderate voters and independents.

Slightly more than half of voters polled (51%) viewed the siege at the Capitol and the continued claims that the election was stolen as attacks on the country. Conversely, 39% said the events of Jan. 6 were the result of “legitimate concerns” about the election and were not an attack on the U.S.

Roughly one in 5 voters said they’d be more likely to vote for a candidate who continues to argue the election was rigged or has taken steps to put Trump back in office.

Methodology: From May 27 to 31, 2022, Data for Progress conducted a survey of 1,220 likely voters nationally using web panel respondents. The sample was weighted to be representative of likely voters by age, gender, education, race, and voting history. The survey was conducted in English. The margin of error is ±3 percentage points. N=1,220 unless otherwise specified. Some values may not add up to 100 due to rounding.

Keya Vakil Keya is a reporter at COURIER, where he covers everything from healthcare to climate change. Prior to joining Courier Newsroom, Keya worked as a researcher in the film industry and dabbled in the political world.

LGBTQ 'Standing in My Truth': A North Carolina Man on Coming Out in a Straight Marriage 

Economy Behind the Curve: Why the Minimum Wage in NC Hasn’t Gone Up in Years

Breaking This Charter Teacher Claimed His School Forced Him To Come to Work During The Pandemic. The School Just Fired Him.

Get exclusive North Carolina stories & news right in your inbox